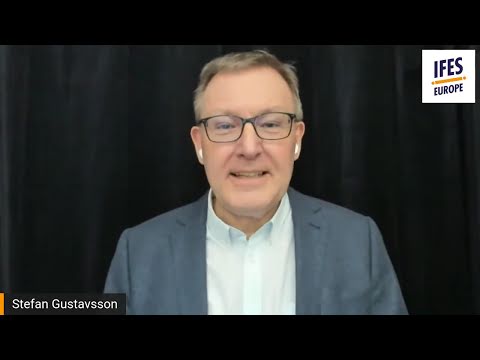 This article is based on IFES Europe’s webinar which was streamed in January 2021 here with Stefan Gustavsson, Director of Apologia. The discussion was chaired by David Montgomery of IFES Europe and featured lawyer Damilola Makinde and theologian Charlie Hadjiev.

“A conspiracy theory is an explanation for an event or situation that invokes a conspiracy by sinister and powerful groups, often political in motivation,[2][3] when other explanations are more probable.[4][5] The term has a negative connotation, implying that the appeal to a conspiracy is based on prejudice or insufficient evidence.[6]” Wikipedia

There is now a pandemic of conspiracy theories. Some can end up being true, e.g. Dieselgate. But others are groundless, e.g. Pizzagate. Their consequences can be dangerous.

Conspiracy theories are not a new phenomenon. They have happened all through history. But, social media and the internet now enable them to spread faster and have a greater impact.

Conspiracy theories are not postmodern and relativistic. Postmodernism argues that there is no ultimate truth. But the proponents of a conspiracy theory claim that the theory is absolutely true.

Conspiracy theories are not necessarily a simple explanation to a complex issue. Sometimes the theory is hugely complex.

Conspiracy theories are not always fantasy and imagination. Some theories turn out to be true. We need to be open to that possibility.

Conspiracy theories are not more common in open and democratic societies where people are more free to express ideas. They are almost equally common where there are dictatorships. They may be spread in different ways but they are a universal phenomenon.

Conspiracy theories do not all follow the same pattern. Some focus on one individual, some focus on huge organisations or nations. It is a very diverse phenomenon.

Conspiracy theories are a human phenomenon. So what should be a Christian response and attitude?

The word truth appears in the New Testament more than 100 times. The New Testament makes claims about truth and calls Christians to be people of truth. Jesus said that He is the truth (John 14:6). The Gospel is the message of truth (Ephesians 1: 13). Paul said “We cannot do anything against truth but only for the truth” (2 Corinthians 13: 8).

The opposite of truth is myth. “Mythos” appears in the New Testament 5 times, saying that Christians do not believe them, should not believe them and should keep their focus on open, public truth. Paul said that we should have nothing to do with godless myths (1 Timothy 4: 7). See also 2 Peter 1: 16, 1 Timothy 1: 4, 2 Timothy 4: 4 and Titus 1: 14.

Christian truth is open, public and accessible. Jesus said that he spoke and taught openly and did nothing in secret (John 18: 20-21). We should do the same.

In the New Testament, we find an invitation to examine the truth and find out what is true or false, e.g. Acts 17: 11. We are urged to test prophecies, holding on to what is good and rejecting every kind of evil (1 Thessalonians 5: 20-21).

Finally, Christians are called to expose darkness and avoid it completely (Ephesians 5: 11).

So Christians are called to be people of truth, having nothing to do with myth, legend or secrets but being focused on open, accessible truth. We should not promote lies and darkness but expose them.

In Matthew 12: 22, we see a conspiracy theory against Jesus. Jesus was performing miracles but the Pharisees said that He did it with the power of the Devil!

In Matthew 28: 12-15, we see a conspiracy theory against Christians. Confronted with the empty tomb, the Jewish leaders told the tomb guards to say that the disciples had stolen Jesus’ body. It was a story which was widely believed and perpetuated for decades.

The next generation of Christians in Rome suffered the gruesome consequences of a conspiracy theory against them. Tacitus wrote that, in A.D. 64, Emperor Nero wrongly blamed Christians for the huge fire that had ravaged the city. This led to terrible torture and suffering.

There have been conspiracy theories against the Church. In our time, one of the most well-known are the claims in “The Da Vinci Code”. Dan brown, the author, claims that those who selected the Gospel accounts to appear in the Bible deliberately missed out better Gospel accounts because of pressure from Emperor Constantine.

So there is a lot at stake. We need to analyse the conspiracy theories against the Gospel and respond to them. And then we must be very careful not to affirm similar arguments today regarding other theories. We need a coherent attitude.

Mainstream media is often biased so it is right to be critical. But is it corrupt? Does it lie all the time? No. Let’s remember that it is mainstream media that loves to expose conspiracies in politics or sport or finance. Watergate was exposed by mainstream media.

Let’s be sceptical of big conspiracies. We know that people are corrupt so we can expect conspiracy and lies. But people are also made in the image of God. So truth has a friend in people’s conscience. That means that there will be whistle blowers who will want to expose conspiracies. There will be even more whistle blowers where they can expect money and fame for sharing the truth. So this makes it very unlikely that conspiracies involving 1000s of people can continue. Surely someone will speak up. Benjamin Franklin said, “Three people can keep a secret, if two of them are dead.”

When we read or hear about a conspiracy theory, let’s focus in on the actual evidence. The sophistication of the presentation is irrelevant. Anyone can produce a great looking YouTube film.

Let’s also not be too impressed by titles. An academic title is good but is not sufficient. Check out the title, if, for example, the university is well respected. But, even if it is, someone can still be bad at assessing arguments or they can have a very strong agenda that makes them blind to truth. Always listen to more than one voice.

Let’s not be impressed by strong assertions, especially those that appeal to your emotion. Instead, look for evidence and coherent argumentation. We need to be ready to sift through a lot of material to distinguish what are well grounded affirmations or just blind assertions.

Conspiracy theories focus on unresolved questions, gaps, uncertainties, puzzling details or minor contradictions instead of trying to find a cumulative case for the best explanation. So let’s zoom out and look at the big picture.

Responding to those who believe conspiracy theories

One way to respond to someone who loves conspiracy theories is to return the compliment. They might well say things like the following:

· “People are corrupt so you can’t trust what they’re saying,”

· “Things are not what they seem to be.”

All of these things are true. But they are also true of those who spread the conspiracy theory and the content of the theory.

One of the reasons people stick with conspiracy theories is that the followers often feel part of a community. That is attractive in a time when society is atomised. So let’s be relational as we respond. The best thing we can do is deeply to listen to people rather than dismiss them. Let’s not lead with facts & information. Instead, let’s show empathy, ask questions and encourage self-reflection. Let’s disarm belief in falsehood with compassion and kindness.

This UNESCO website on conspiracy theories has great tips on how to engage.

In the end, let’s remember 2 Corinthians 4:2. “Rather, we have renounced secret and shameful ways; we do not use deception, nor do we distort the word of God. On the contrary, by setting forth the truth plainly we commend ourselves to everyone’s conscience in the sight of God.”