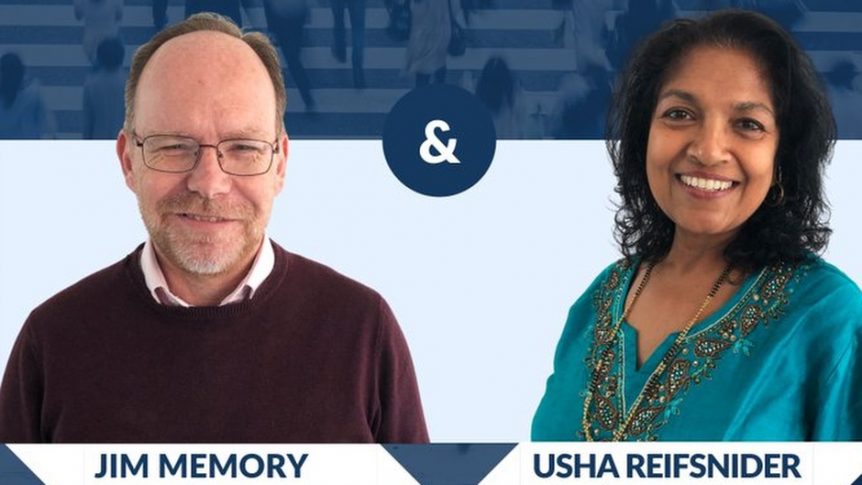 With Jim Memory and Usha Reifsnider at the helm,
Lausanne Europe gets a dynamic leadership team,
as diverse as the continent itself.

As the new Regional Director for Lausanne Europe, Jim Memory brings to the role a lifetime
of experience as a missionary, mission leader, and church planter in Spain with the
European Christian Mission (ECM). He is a postgraduate lecturer at All Nations Christian
College (UK), a conference speaker and a writer on mission in Europe. He is the author of
Europe 2021, a report on the context for mission in Europe today which has been translated
into six languages.

The new Co-Regional Director, Usha Reifsnider, a British Gujarati, has ministered to migrants
and refugees from Muslim, Hindu and Sikh backgrounds for decades. She is one of the
directors of the Centre for Missionaries from the Majority World. She will complete her PhD
with the Oxford Centre for Mission Studies this year. Her thesis is entitled: Transcultural
Aspects of Gujarati Christian Conversion.

Jim and Usha will take on the baton from Jean-Paul Rempp who has faithfully served as
Regional Director for Lausanne Europe for the past nine years.

They will work together with a regional team, which will initially be the same team which
organized the LE20/21 Conversation and Gathering (Lars Dahle (chair), Ole-Magnus Olafsrud
(vice-chair), Jim Memory, Usha Reifsnider, Janet Sewell, and Bodil Skjøtt). They are eager to
broaden the representation of the team, and to strengthen the momentum built and the
connections made during the virtual Gathering, when more than 1.000 church and mission
leaders met to wrestle with the issues facing mission and evangelism in Europe today.

“Lausanne Europe aspires to be a network and a platform for collaboration,” Jim Memory
says. Since its beginning, in Lausanne, Switzerland in 1974, the Lausanne Movement has
functioned as a relational network and a theological platform. Going forward it also wants
to develop even further as a digital platform for sharing ideas and fostering strategic
initiatives and collaboration.

One of the main topics discussed at the November Gathering was how immigration from the
Majority World is contributing to the new evangelization of Europe. Usha Reifsnider’s postdoctoral plans include research on how members of the Majority World are working
alongside the European churches to reach out to refugee and immigrant communities, as
well as how Majority World missionaries contribute to reaching traditional Europeans who
no longer relate to the church. Usha’s ministry and research have focused on worldwide
relationship networks. She hopes to bring this aspect into her role at Lausanne Europe. “I
eagerly anticipate the opportunities to work with globally distinct cultures to unite as a
body,” says Usha Reifsnider.

“Europe is perhaps the greatest challenge in world mission today», says Jim Memory. “Most
Europeans appear to have been inoculated against the gospel by the vaccine of cultural
Christianity. However, I believe the weakness of the Church is also God’s opportunity. More
than ever before, European Christians are collaborating, networking, and planting churches
together, and into that mix, God has brought the vitality of Christians from the Majority
World.

See, Meet, Talk, Act has been the motto for Lausanne Europe activities over the last four to
five years. It has included facilitating a continent-wide Conversation, in which leaders met in
Impact Groups to discuss relevant topics. Jim Memory believes this motto is relevant for all
Christians in Europe: “We need to see different perspectives and hear different voices. We
need to meet to make new connections. We need to talk and to hear one another. And we
need to act in getting the Gospel out to this generation of Europeans. Lausanne Europe is
about helping churches, ministries and individual Christians, to spread the Gospel in every
sphere of European society.”